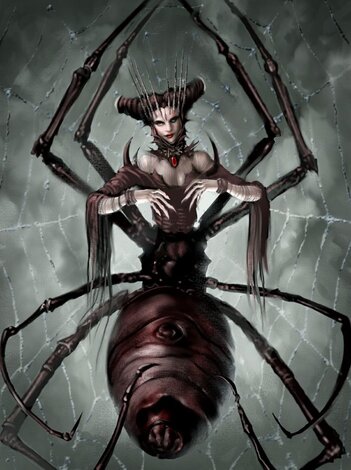 Achrya, the Tangler, the Webmistress, (the Gracious One or The Lady in Pargun)
Minor Goddess or Demon
Symbol:  Spider or web
Alignment: Chaotic Evil
Portfolio:  Chaos, Destruction, Evil, Trickery, Illusion.
Worshipers:  Those who are willing to use trickery and betrayal to not only gain power, but also to ensnare/destroy/humiliate those who are more powerful/fortunate/good than they are. Many of Achrya's worshippers are enticed or seduced into her worship while others are blackmailed by secrets/indiscretions . In Pargun, Achrya is viewed as a good goddess associated with weaving (see 'Background').
Priests (overview):  Achyra's priests are chaotic evil.  While they are careful to always advance her plans and schemes, each priest is constantly striving for personal power, influence, and favour with the Webmistress.  Often this jockeying for power involves subtle sabotage of any rival priests of Achyra. Yet, any such moves must be carefully taken to ensure the downfall of a rival does not also hinder or hurt Achyra's plans.  Priests, like their goddess, prefer subtle rather than direct tactics.  Plans are long term and, like their symbol, a major aim of any plan or action is the opportunity to enjoy the fruitless struggle of 'the prey' once it realizes it is trapped.  Priests work carefully to hide their identities and true allegiance. High level priests can shape change into a giant spider or a giant spider with a humanoid torso and head.


Background:  Originally, Achrya the Tangler, in Old Aare was depicted as webspinning larva damaging to stored grain and other materials...lessening yield and fertility.  After the fall of Old Aare, she became associated with spiders (the notion of "webspinning" transferred, but not the larval part.)  Presently in the North, Achrya is associated with ruin, secret conspiracy to harm, etc.  In Pargun, Achrya is also known as the Gracious One or The Lady. Through historical and linguistic accident, Achrya became a "good" goddess to the Pargunese, who equated spinning with weaving, and weaving with sails.  However, it is the same goddess/demon.  Achrya and her followers have told the Pargunese what they wanted to know/hear.  However, she has used this position of trust to slowly turn Pargun towards a kingdom of her design and desires and to encourage Pargunese animosity and aggression against the other northern kingdoms.
Priest Character Information:
Alignment: Achrya is chaotic evil. Her priests and followers are expected to be (or on their way to becoming) chaotic evil.
Minimum Ability Scores: Wisdom 12, Intelligence 12.
HD: d8
Races Allowed:  Any.
Nonweapon Proficiencies Required: Disguise.
Nonweapon Proficiencies Recommended: Dancing, Etiquette, Modern Languages, Reading/writing, Religion, Forgery, Herbalism/poison, Reading Lips, Set Snares, Ventriloquism.
Weapon Proficiencies Required: None.
Duties of the Priest: Guidance/direction of the faithful in actions to achieve Achrya's plans. Missions to further those plans.  Corruption and/or discrediting of those who keep order and stability.
Weapons Permitted: Blowgun, bows (all), crossbow, dagger/dirk, knife, lasso, net, quarterstaff, spear, stiletto, sword-rapier (preferred weapons are those that can be disguised and/or allow the enemy to be trapped).
Armor Permitted: All non-metal.
All together, these constitute Medium combat abilities.
Other Limitations:  None
Spheres of Influence: Major Access to All, Charm, Divination, Necromantic (reversed only), Protection, Summoning.
Minor Access to Animal, Elemental, Guardian, Plant.
Powers:  Charm/Fascinate. Detect Secret Doors (Success on roll of 1 on ld6 when passing within l0’, 1-2 on
ld6 to find secret doors and 1-3 on ld6 to find concealed portals when actively searching). At 8th level: Shape changing - 3 times/day priest may turn into a giant spider or half-spider/half humanoid.
Followers and Strongholds: The followers are received at 9th level, and consist of one third-level priest and seven first-level priests of the same order, one fifth-level thief and one fifth-level bard (who act as assistant mischief-makers and accompany the priest everywhere), and one third-level fighter and seven first-level fighters who act as guards. The priest may take the following on adventures: One priest, the thief, the bard, and one fighter of his choice. The priesthood will pay for half of the cost of stronghold construction at 9th level.
Possible Symbol: Spider or spider web.
Notes: Achrya and her priests prefer to sow disorder from  the shadows.  Much as a spider prefers a cluttered and disorderly house; Achrya prefers a realm in chaos with many different factions fighting against each other.  Achrya and her followers will cooperate with Liart and his followers for a greater aim; but the two deities and their followers are under no illusion about future betrayal by their 'allies'.  Achyra views Liart as a blundering bully who depends totally on brute force while Liart views Achyra as a coward who tries to be too clever.