Alyanya "The Lady, Lady of Peace, Lady of Flowers" 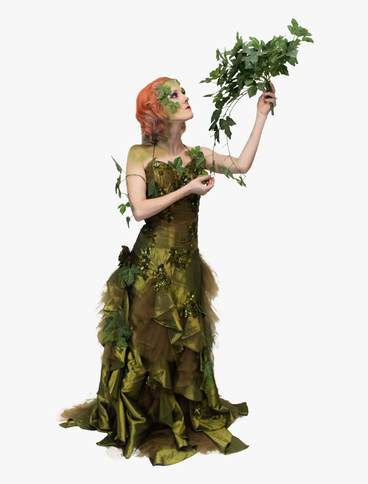 Greater Deity
Symbol: most important local crop (e.g. sheaf of wheat or bunch of
grapes, etc.)
Alignment: Neutral Good
Portfolio:  Agriculture, Fertility, Peace, and Health.
Worshipers: Humans  - especially farmers, builders, mothers, healers, and those people with significant Old Human heritage. Alyanya is worshipped by one name or another in all the human realms (though open worship is repressed in Pargun and Kostandan).
Priests (overview):  Most of Alyanya's priests are respected farmers and healers who lead their communities in the rituals to honour their goddess.  Of the remainder, most have low level spells but substantial knowledge of healing and farming that they share as they wander the countryside. A very limited number of priests have an impressive variety and power of spells, but poor combat skills.  In addition, they are bound by oaths that clearly identify them as Alyanya's agents.  In return, these priests are protected by "Alyanya's wrath".
Alyanya believes her priests are to widely spread knowledge so people work with nature rather than using magic to force nature to their will.


Background:    In Old Aare, Alyanya was the goddess of health, fertility, peace, etc. In the old days, it was Alyanya who taught the magelords to multiply fertile soil and ensured the fertility of herds and flocks as well as humans.
Presently, in Tsaia, Fintha, Lyonya, Prealith, and Aarenis, Alyanya is worshipped as the goddess of fertility, peace, and harmony.  She merged with a very similar northern deity whose original name has been lost (some scholars wonder if it is the similar goddess worshipped in Dzordanya - where the rituals are a closely kept secret of the Dzordanya matrons).  In the other kingdoms, men (but not women) "blood the blade" before digging a ditch, plowing, etc. to honor Alyanya and get her permission to "break Alyanya's body," the soil. Now most blades are blooded before use (but not war blades.) A little blood is mixed with the mortar of foundation stones, as well. It must be the blood of the builders. The use of blood in Alyanya's rituals is different in intent, source, and amount from that used in Liart's worship.
Priest Character Information:
Alignment: Alyanya is neutral good. Her priests may be true neutral or good aligned: most are
neutral good. The flock may be of any alignment.
Minimum Ability Scores: Wisdom 11, Constitution 12.
Races Allowed:  Half elves (favouring human parent) and human (favouring mixed heritage with some Old Human background).
Nonweapon Proficiencies Required: Agriculture and healing/herbalism.
Nonweapon Proficiencies Recommended: Reading/Writing, Religion.
Weapon Proficiencies Required: None.
Duties of the Priest: Guidance, Marriage. Observation of annual celebrations at the solstices, planting, and harvest. Vigilance against any threat to the health of community members and the community’s ability to grow its food, including magical blights and droughts brought on by evil magicians or priests, artifacts or enemy gods.
Weapons Permitted: Bill, flails (both), hand-throwing axe, scythe, sickle, quarterstaff.
Armor Permitted: All non-magical non-metal armor
All together, these constitute Poor combat abilities.
Other Limitations: Priests who are capable of casting spells are required to render healing if asked.  A priest may refuse only if the request is from an evil being, from a being who has harmed a member of Alyanya's flock, or if rendering the aid would interfere with the priest carrying out Alyanya's will.   These priest are also required to wear Alyanya's symbol on their outer clothing.
Spheres of Influence: Major Access to All, Creation, Divination, Healing, Necromantic, Plant, and Weather.
Minor Access to Animal, Charm, Guardian, Protection, Summoning, and Sun.
Powers: Analysis, Detection, Identification of any sort of domesticated grain or garden plant: the priest can look at a
field and tell what‘s being grown, how far along it is in the harvest year, and what the state of the crop is (healthy, diseased, drought problems, etc.).
At 3rd Level: Analysis, Identification of diseases and poisons: on a Intelligence check (which the DM may modify according to the commonness or rarity of the ailment), the priest will know what sort of disease or poison afflicts
his patient.
Create Food & Water: The Priest can cast this spell once per day in addition to all other spells that he can cast.
Alanya's Wrath: A being who causes deliberate and unwarranted harm to one of Alyanya's priests might face Alyanya's Wrath (the chance exists for all priests, but increases with the spell power and rank of the priest).  The subject of her Wrath will find all products usually blessed by her as cursed/mildly poisonous (e.g. bread or beer or wine, etc. will make the subject violently sick).  The Wrath can only be lifted by Alyanya's head priest.
Followers and Strongholds: The followers are received at 8th level, and consist of one fifth-level priest, one third-level priest, one second-level priest, and ten first level priests, all of the same god, plus one second-level warrior and eight first-level warriors to act as guards. The priest may take the following on adventures: Three priests and two warriors of his choice. The priesthood will pay for half of the cost of stronghold construction at 8th level.
The stronghold must act as a central source of information about healing/health and agricultural techniques for the farmers of the area: the priests must not turn away farmers or other followers who come for advice.  It is also to act as a central storage facility for seeds and emergency food supplies.  Finally, a central part of the stronghold will be an infirmary where all people who request treatment are cared for (note: treatment and advice may be refused to those beings who cause harm to Alyanya's followers or commit an evil act).
Symbol: Most important local crop.
Notes: The weapons chosen for this priesthood are those which have some bearing in agriculture.