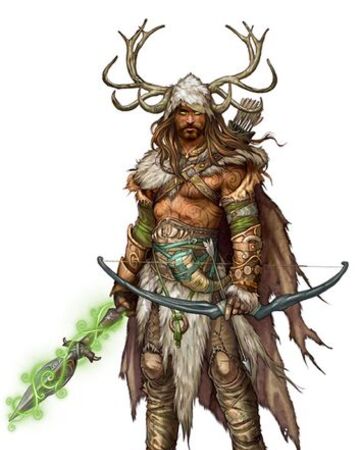 Guthlac, Lord of the Hunt
Medium God
Symbol:  stylized wolf (or any animal tricky, dangerous, and quick).
Alignment: True Neutral
Portfolio:  Hunters, wild animals.
Worshipers: Hunters, trappers, foresters. Half-elves who favour their human side, Humans  - especially those of Horse Nomad ancestry, but also Old Humans and Ice People.
Priests (overview):   These priests are hunters and their mission is to teach their flock sound principles of hunting: Not killing mothers with young, not depopulating the wilderness of whole species, etc.  These priests also protect wilderness areas, though their focus is the wilderness serving as a habitat for the animals needed for the hunt and furs rather than the trees, etc. that make up the wilderness.  Priests will also work to ensure those who abuse Guthlac's realm will face the natural consequences of their actions … whether legally, through community pressure, or even these interlopers finding themselves the prey of some of Guthlac's more fearsome creatures.
Background:   Guthlac is most known among the Horse Nomads - a people who are tied more to hunting than the other humans of the realms. However, he is worshipped by any hunter/woodsman of any human or half-elf (human favoured) background. Guthlac is the patron of the hunter, and is a provider of food and furs; thus he is a god much loved of woodsmen. Though he hunts animals and encourages his flock to do likewise, he is usually a wise hunter, a patron of animals and their protector from needless destruction at the hands of too-greedy hunters and poachers. Guthlac is a neutral deity; while he accepts and glories in the prowess of his flock at hunting and trapping - especially dangerous hunts that require trickiness and/or running down the quarry; Guthlac also favours those non-human hunters that are themselves dangerous, tricky, and full of endurance.  Guthlac is a firm believer in hunting weeds out the weak or the unwary - whether the prey is human or non-human.  As a result, there are many (especially among city dwellers or farmers in settled lands) people who believe Guthlac is a fearsome god at best, an evil god at worst.

Priest Character Information:
Alignment: Guthlac is true neutral. His priests are usually true neutral or neutral good.  His followers may be of any alignment.
Minimum Ability Scores: Wisdom 10, Dexterity 12.
HD: d8
Races Allowed:  Half elves (favouring human parent) and human (favouring mixed heritage with some Horse Nomad or Old Human or Ice People background).
Nonweapon Proficiencies Required: Hunting.
Nonweapon Proficiencies Recommended: Direction Sense, Fishing, Reading/Writing, Religion, Animal Lore, Mountaineering, Running, Set snares, Survival, Tracking.
Weapon Proficiencies Required: Bow.
Duties of the Priest: Guidance, Marriage.
Weapons Permitted: Blowgun, bows (all), crossbow, javelin, lasso, net, sling, spear.
Armor Permitted: All non-metal armours, no shields.
All together, these constitute Medium combat abilities.
Other Limitations:  None
Spheres of Influence: Major Access to All, Divination, Guardian, Protection, Summoning.
Minor Access to Animal, Healing, Plant, Weather.
Powers:  Permanent +2 to hit with bows above and beyond all other bonuses.
Followers and Strongholds: The followers are received at 9th level, and consist of one third level priest and two first-level priests of the same order, plus one fifth-level ranger, three third-level rangers, and six first-level rangers to act as 'forest rangers' and ten Normal Men and Women, all whom have the Veterinarian Non-weapon proficiency (identical to healing proficiency but can be only used on animals and monsters) . The priest may take the following on adventures: One priest and two rangers of his choice.  The priesthood will pay for half of the cost of stronghold construction at 9th level. The stronghold can be built in a city or the wilderness, but must work principally to protect the animal life of the surrounding wilderness. (This does not mean to stop hunters if the hunting is carried out at a level that does not threaten the animal population. But any factor which endangers animal species - as drought, excess hunting, deforestation, etc. - will bring on the wrath of the priesthood).
Symbol: Stylized wolf or other creature that is dangerous, cunning, and has endurance.
Notes: Relations between this priesthood and the elves can be somewhat touchy as what is considered 'best for the wilderness' and who is the best judge of that state can be disputed between the two groups.  Relations between the priests of Guthlac and the kuakgan are normally genial as their philosophies are similar and the priests of Guthlac are careful to leave the kuakgan groves alone.