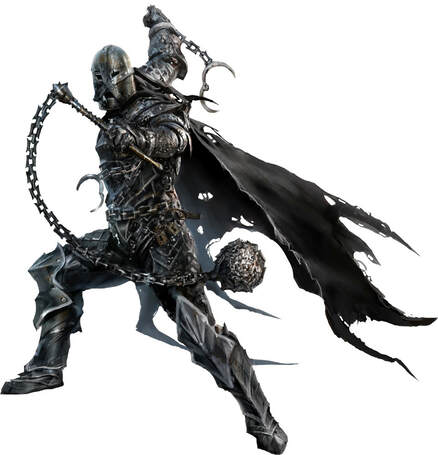 Liart, Lord/Master of Torments, Bloodlord
Medium God
Symbol:  horned circle (see 'Background')
Alignment: Lawful Evil
Portfolio:  Fear, torture, pain, tyranny, hatred.
Worshipers: All who wish to inflict pain on others and are fearful of it being inflicted on them .  Those who practice blood magery.
Priests (overview):  Priests strive to master the ability to 'read'/analyze people in order to know what will cause that particular individual the most pain and suffering. Priests of Liart fear him; but their goal is to make others fear him even more than they do. The priests goal is to spread the fear of Liart and force everyone to submit to his domination.   Priests of Liart are always masked so no one knows their identity - partially for the safety of the priest but more so to cause fear in the other followers who will never know if the person next to them is a priest of Liart.  Priests train in the ability to inflict the maximum amount of pain without actually killing the victim until the 'proper' moment.
Background:   Liart, Lord of Torments, Bloodlord, and worshipped by those practicing blood magery. In Old Aare, Liart's symbol was a blood-sucking parasite that caused intense pain when attached or removed, and long after. Presently, Liart's symbol is the "horned circle"--a link in a chain of links that are barbed, for torment. Liart's priests wear red masks, usually leather, designed to look frightening, and perform torture both to honor Liart and as a way of gaining mage powers.

Alignment: Liart is lawful evil. His priests and followers are expected to be (or on their way to becoming) lawful evil.
Minimum Ability Scores: Wisdom 9.
HD: d8
Races Allowed:  All. Those of magelord ancestry are favoured.
Nonweapon Proficiencies Required: Religion, Torture.
Nonweapon Proficiencies Recommended: Reading/Writing, Healing (but only to keep a victim alive longer).
Weapon Proficiencies Required: Barbed whip.
Duties of the Priest: Missions that spread the worship and goals of Liart. Priests of Liart work to destroy/kill the forces that have the power to oppose their aims.
Weapons Permitted: Axe - great, bill, crossbow, dagger/dirk, knife, net, picks (all), polearm, scourge, scythe, sickle, stiletto, sword-long, sword-great, sword-bastard, whip. Note: weapons follow 3 types: capture (for torture), ambush (powerful good figures), oversized weapons (impressive destruction).
Armor Permitted: All.
All together, these constitute Good combat abilities.
Other Limitations: None
Spheres of Influence: Major Access to All, Charm, Combat, Necromantic.
Minor Access to Animal, Protection (reversed only)
Powers:  Cast 'Detect Good' 3 times/day, At 5th level Inspire Fear (This spell is similar to the wizard’s fourth-level fear spell, though the cleric does not have to use material components. A priest with this power can use it twice per day), Control Undead.
Followers and Strongholds: The followers are received at 9th level, and consist of one third-level priest and two first-level priests of the same order, plus one fifth-level fighter, three third-level fighters, and six first-level fighters to act as soldiers, and one third-level thief and two first-level thieves to act as special agents; all will be of the exact same alignment as the priest they follow. The priest may take the following on adventures: two priests, two fighters, and one thief of his choice. The priesthood will pay for half of the cost of stronghold construction at 9th level. Temples of Liart typically have torture chambers and dangerous, trapped dungeons as part of their construction.
Symbol: horned circle.
Notes: Specialty priests, called pains, operate as a separate arm of the faith. They travel from place to place carrying out the god's will as envoys, agents, or inquisitors rather than being permanently stationed at a temple. Ordinary clerics of Liart hold the pains in high regard. A temple mainly consists of clerics, but one to three pains can be called upon if needed. Blood mages often are assigned to groups of pains.