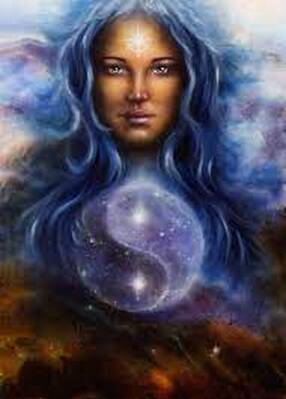 Myrna, The Light of the Night, The Closed Book.
Medium Goddess
Symbol: A stylized moon.
Alignment: True Neutral
Portfolio:  Knowledge, moon, (wizardry).
Worshipers: Wizards, scholars, teachers.
Priests (overview):   All priests of Myrna are teachers and information gatherers, but only a limited number of unknown priests are involved in the storing and distribution of the more significant/obscure knowledge.  While known/common knowledge is available in Myrna's schools and temples, obscure/otherwise unknown/dangerous knowledge is kept secret.   To access information, a person needs to trade information of equal or greater value than the desired information to Myrna's priesthood.  Wizards who do not worship Tenille follow Myrna instead.
Background:   Myrna is highly revered among those of Wanderer heritage, by scholars, and by wizards.  Myrna served as an unofficial goddess of magic for wizards when Tenille was unavailable.  Myrna and Shelta were brought to the Kingdoms with the arrival of the Wanderers. While Shelta's role is obvious, the goddess of travelers,  Myrna's significance is not as clear.  From first contact through today, it is very obvious the Wanderers are fervent collectors of knowledge. What is not obvious and is ironically unknown is the bit of knowledge that explains the reason for this racial obsession, its purpose, and where all this knowledge is stored.  Accessing the information is a convoluted process with no direct access to the librarian/record keeper or whatever the Wanderers call them. Best guesses are the priests of Myrna and Wanderer elders play a key role; but which ones, how it works, where, etc.  are closely kept secrets.  Myrna is a moon goddess - though only for the aspect of the light of the moon. Shelta's stars guide the traveler's path while Myrna's moon helps to guide his steps.

Priest Character Information:
Alignment: Myrna is true neutral.  She gathers all knowledge.  However, priests tend to be good aligned, true neutral or lawful neutral. Evil priests and chaotic neutral priests have shown to be poor guardians of knowledge that it is to remain secret and unused.
Minimum Ability Scores: Wisdom 10, Intelligence 13.
HD: d6
Races Allowed:  Half elves (favouring human parent) and human (favouring Wanderer).
Nonweapon Proficiencies Required: Reading/Writing.
Nonweapon Proficiencies Recommended: Navigation, Religion.
Weapon Proficiencies Required: None.
Duties of the Priest: Guidance, Marriage, Education of promising young people to expand the network of information gathering. Gathering Information.  Missions to acquire new knowledge and preserve the information network.
Weapons Permitted: Quarterstaff, darts, sling, dagger/knife.
Armor Permitted: None.
All together, these constitute Poor combat abilities.
Other Limitations:
Spheres of Influence: Major Access to All, Charm, Creation, Divination, Protection, Summoning, Sun.
Minor Access to Animal, Elemental, Guardian, Healing, Necromantic, Plant.
Powers:  The priest is granted 1 additional language per level for every level from Levels 1 to 8.
Followers and Strongholds:  The followers are received at 8th level, and consist of three third level priests and six first-level priests of the same order, plus one third-level fighter and two first level fighters to act as guards, and twenty Normal Men and Women, each of whom has Reading/Writing as a nonweapon proficiency. The priest may take the following on adventures: Three priests (only one of whom may be third-level), one fighter, and four Normal Men and Women of his choice. The priesthood will pay for half of the cost of stronghold construction at 8th level. The stronghold must act as a depository of knowledge and a center of learning for promising young people.
Possible Symbol: A stylized moon.
Notes: