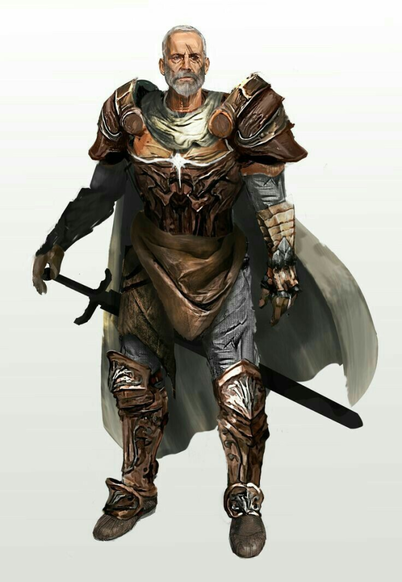 Falk
Saint
Symbol:  gold ring
Alignment: Lawful Good
Portfolio:  Courage - especially moral courage, loyalty, oath keeping.
Worshipers: Humans and half-elves - mainly of noble blood-  throughout the North, but especially in Lyonya.  Oath takers, guardians/bodyguards, and any who opposed to or are oppressed or enslaved call upon his aid.
Priests (overview):
Knights of Falk are nobles; commoners can rise to the rank of sargeant.  All priests are Knights or Sargeants; but most Knights and Sargeants are not priests.  Priests must devote themselves totally to the service of Falk while non-priests take the Oaths but are free to also serve in another capacity (e.g. the King's Squires of Lyonya are Knights of Falk but not priests). Both are equally valued - non-priests extend Falk's influence and serve as an example; priests devote themselves totally to furthering Falk's goals. Priests of Falk are expected to spread the faith, serve as an example to others, are ardent opponents of slavery and oppression in any form, and are often called upon  to witness and sanctify especially important and binding oaths.

Background:   Falk. Founder of the Company of Falk, now revered as a saint, Falk was a nobleman or prince who bound himself to years of imprisonment and slavery to free his brothers from a wicked king. According to legend, at the end of the ordeal, when freed, he was an old man, and half-crippled, while for years his brothers had lived in comfort and made no effort to free him as he had freed them. Miraculously restored to health (though nothing could restore the lost years, it is said), Falk went on aiding the helpless and gathered around him other like-minded nobles. Eventually he disappeared in a cloud of light (it is said.) Falk is the patron of courage, but especially moral courage, steadfast loyalty, and oath-keeping. Falk's worship is centered in Lyonya, where Falk's Hall trains the Knights of Falk. All of the King's Squires are Knights of Falk. Falkians are organized into Fields led by Captains.
Priest Character Information:
Alignment: Falk is lawful good. His priests and followers are expected to be lawful good.
Minimum Ability Scores: Wisdom 10, Strength 12.
HD: d10
Races Allowed:  Half elves (favouring human parent) and human (favouring mixed heritage with some Old Human background).
Nonweapon Proficiencies Required: Reading/Writing.
Nonweapon Proficiencies Recommended: Law, Religion.
Weapon Proficiencies Required: None.
Duties of the Priest:  Duties of the Priest: Guidance, Marriage. Missions: A priest of this god is almost always on some sort of mission, a simple one - to protect a specific person, place, or thing. The priest might have chosen his current mission, or might have been assigned to it by his priesthood. That mission might change between adventures, but
he’s almost always on one. Note: Priests of this sort do not maintain temples for small communities; they spend most of their time on mission. Only when they reach eighth level do they build their own temples and send subordinate
priests out on missions.
Weapon and Armor Restrictions:
Weapons Permitted: All.
Armor Permitted: All.
All together, these constitute Very Good combat abilities.
Other Limitations:
Spheres of Influence: Major Access to All, Guardian, Necromantic, Protection.
Minor Access to Healing.
Powers:  Once per day can cast "Zone of Truth" (to ensure oaths are sworn with intent to carry them out).
Followers and Strongholds: The followers are received at 8th level, and consist of three third level priests and six first-level priests of the same order, plus five third-level fighters to act as temple guards. The priest may take the following on adventures: Three priests (only one of whom may be third-level) and two fighters. The priesthood will pay for half of the cost of stronghold construction at 8th level. On the frontier or in a dangerous area, the rest of the site will be in the fashion of a castle or fortress so that it can easily repel invasion.
Symbol: A gold ring.
Notes: Falk's centre of worship is Lyonya.  However, followers of Falk can be found throughout the other kingdoms south of the Honnorgut River.  Knights and priests of Falk do operate within Prealith; though they have a limited presence.