The Elven Story of the Realms 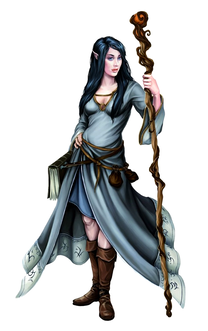 Notes on Elven Historical Thinking and Records:
There are living elves in the Ladysforest who witnessed events for the last several thousand years.  Yet this is a historian's curse rather than boon. Elves view the past totally differently than the other peoples due to their unlimited lifespan. Written records are not needed with living eyewitnesses.  But, memories shift over time and it is very difficult to give an unbiased account of the past when participants to those events are sitting across from you.  Also, the sheer scale of the elven time frame means only events with lasting impact or of especial significance to elves get noticed (thus the seeming reluctance of elves to act as they know time will resolve most problems).  Finally, since past events are 'known', the 'lessons learned' dictate the history rather than the other way around.  Thus, the elven version of history is made up of the songs, stories, and parables for teaching both elves and non-elves about the wisdom of the elven way.  Note: An observation I wish omitted from the public copy of this work: Elvish works tend to minimize or avoid any 'unpleasantness' associated with elves (see the Iynisin below).  Examples to illustrate certain follies are usually drawn from the actions of the 'younger races'.


The History of the World and Prealith Through Elven Eyes

Note: This account is compiled from Ladysforest sources.  I have included additional notes at the end from 'Wild Elves' sources and my own musings.  Also, due to the nature of elves, the legendary and historical past are merged.

Addendum One:  "Wild Elves":  These are elves who live outside of the elvenhomes and owe no allegiance to them. "Wild" is the closest translation, but "Unbound" might be more accurate.  They simply call themselves "Elves" or "Singers". Supposedly there are scattered settlements of them - including a rumoured one in western Prealith (based on travelers' tales which I gleaned for the notes for Addendum Two).
​Addendum Two: Interesting bits and pieces from the 'Wild Elves'.  First, there were far more elvenhomes but they 'failed'/'fell'. (Note: This claim inspired me to check the Ladysforest sources carefully enough to find references there). How they failed is unclear though the curious wording is the elvenhomes were both protective (clear wording) and confining (unclear wording).  The elven reticence over discussing the creation of elvenhomes is different with Wild Elves - it is a taboo subject for the protection of humans so they are not involved/endangered AGAIN.  Likewise, it is a concern for human safety that lead to Wild Elf information about the Iynisin. Otherwise, the Wild Elves' accounts through travelers conform to the usual pattern of their Ladysforest cousins.
Addendum Three: The Iynisin/Dark Cousins/Dark Elves. Elves usually deny the existence or pretend the Iynisin don't exist.  Some will reluctantly admit their existence if forced to...  Wild Elves are a little more informative....  The Iynisin are elves who turned their back on the First Tree and all life when the First Kuakgan sang to the First Tree and it responded. At first it seemed a difference of opinion or attitude; but, over considerable time, the Iynisin not only became more hostile to life - especially humans and above all Kuakgan- but they also turned to the worship of dark gods - the Unsinger, the Unnamer, Liart, and the Webmistress. Not only were their souls twisted but, without strong magic, the cruel and evil nature of these beings was obvious to even non-elves.  These creatures were imprisoned with mighty magics, but were able to corrupt the surrounding world indirectly - creating fell creatures that can be found in the hinterlands. Roughly five centuries ago they were able to escape from their prisons due to human blundering. The Wild Elves warn against delving too deeply into the topic of the Iynisin with the elves of the elvenhomes and wandering elves - though they refused to explain why....
Addendum Four: The reader has probably noted the lack of any detail about Prealith.  I can write a book about any of the other Realms but details about Prealith are virtually non-existent in elvish accounts.  The accepted theory is the elves never settled in Prealith (no presence, no interest, no records).  However, and again I ask your discretion on this thought, I suspect a bit of deliberation on this absence for two reasons.  First, Wild Elves have and do live in western Prealith and I have hints this presence predates the split between Wild and Ladysforest elves. Thus, presence.  Second, there is an almost perceptible pattern to elvish discussion of the area - it leads the listener away from Prealith without making the listener aware he or she is being deflected.  It is so subtle that it is just a suspicion or fancy of mine.  But, I advise caution - elves and Prealith are a touchy subject!
​