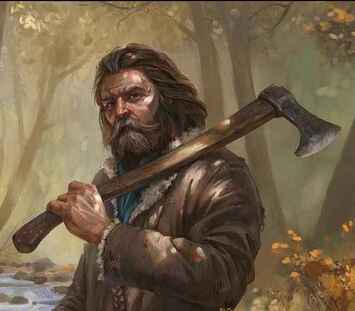 Gird Strongarm
Saint
Symbol:  club
Alignment: Lawful Good
Portfolio:  Common people, defense.
Worshipers: Humans  - especially in Tsaia and Fintha (center of his cult) .
Priests (overview):  The Fellowship of Gird is a highly organized and pervasive group.  Fintha is a theocracy ruled by the Marshal-General of Gird supported by orders of knights, paladins, priests, and a well organized set of granges (local branches of Gird that support common people and train them to defend themselves).  Girdsmen believe in community, the order of law, and the responsibility of all Girdsmen to uphold these qualities. Blood magery is against the law and all magic users are regarded with at least distrust.  Priests actively support all of these beliefs and work hard to expand the Fellowship, mostly through example. Followers are "Yeomen", priests are organized from "Yeoman Marshal" to "Marshal" to "High Marshal" to "Marshal General".


Background:   Gird. Founder of the Fellowship of Gird, now revered as a saint, Gird Strongarm. Hundreds of years in the past, Gird was a peasant who led a successful rebellion against the cruel magelords who had invaded the north and enslaved the indigenous population. Gird, influenced by the gnomes, tried to set up a fair system of law, the Code of Gird, in opposition to the foundation of the magelords' legal system, the Rule of Aare. Though a talented leader, with a sound grasp of irregular warfare, Gird was not perfect or in any way refined.  The Fellowship of Gird is the dominant organized religion in Tsaia, and the Code of Gird underlies Tsaian law. In Fintha, where the feudal system was abolished, the Fellowship of Gird rules. Girdish are organized into Granges (places of worship and training--all are trained in basic military skills) overseen by Marshals.


Priest Character Information:
Alignment: Gird is lawful good. His priests and followers are expected to be (or on their way to becoming) lawful good.
Minimum Ability Scores: Wisdom 10, Strength 12.
HD: d10
Races Allowed:  Half elves (favouring human parent) and human (favouring mixed heritage with some Old Human background).
Nonweapon Proficiencies Required: Agriculture and healing/herbalism.
Nonweapon Proficiencies Recommended: Reading/Writing, Religion.
Weapon Proficiencies Required: None.
Duties of the Priest: Guidance, Marriage. Observation of annual celebrations at the solstices, planting, and harvest. Vigilance against any threat to the community.  Training of yeoman in combat skills and leading them against evil.
Weapons Permitted: All.
Armor Permitted: All.
All together, these constitute Good combat abilities.
Other Limitations:
Spheres of Influence: Major Access to All, Necromantic, Protection.
Minor Access to Guardian, Healing.
Powers:  Laying on Hands: same as paladin.
Followers and Strongholds: The followers are received at 8th level, and consist of three third level priests and six first-level priests of the same order, plus five third-level fighters to act as temple guards. The priest may take the following on adventures: Three priests (only one of whom may be third-level) and two fighters. The priesthood will pay for half of the cost of stronghold construction at 8th level. The stronghold must include a grange building .  On the frontier or in a dangerous area, the rest of the site will be in the fashion of a castle or fortress so that it can easily repel invasion.
Symbol: Club.
Notes: The worship of Gird is concentrated in Fintha with a substantial presence in Tsaia.  There is a scattered presence in Prealith; where the establishment of Gird is discouraged.  The Prealith authorities have no problem with the vast majority of the beliefs and concepts of Gird; however, there are two crucial problems with Gird becoming a significant presence in Prealith.  First, the ultimate authority for Girdsmen is the Marshal-General who, besides being the earthly head of the Order, is the ruler of Fintha.  Obviously the Sea Prince does not want some of his subjects owing a very strong allegiance to another ruler.  Second, Girdsmen are, at best, not supportive of arcane magic and usually hostile to all arcane magic users - especially any magelords.  Since arcane magic has been an important part of Prealith and its defenses…..   Finally, the niche filled by Gird in other lands is neatly, and the people of Prealith with their common sense approach to life would say better, filled by the monks of Saint Neot….  Thus, it is possible to find Girdsmen in Prealith but they are not a significant presence and definitely not encouraged by the authorities or supported by the vast majority of the population.    However, scattered pockets of Girdsmen, travelling Girdsmen,  or even paladins on quest can be encountered in Prealith - including a few zealots who vigorously try to convert and establish centers of Girdish worship...