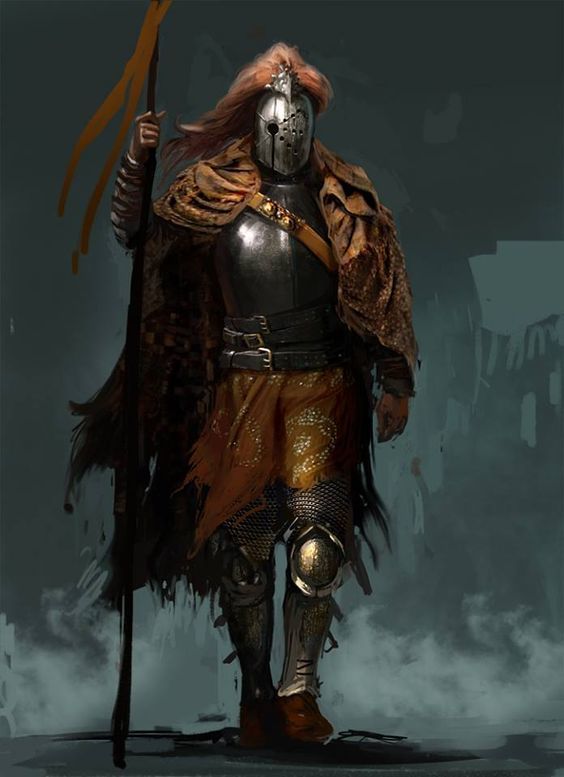 Tir
Medium God
Symbol:  Weapon (often sword)
Alignment: True Neutral
Portfolio: god of war (courage, strength, warrior's honor) .
Worshipers: Warriors - especially human and half-elves - Tir's worship is spread throughout the realms and into Aarenis.
Priests (overview):  Tir's priests vary according to the followers that they serve.  Tir is a true neutral.  War is his portfolio in any form - matters of law or chaos or good or evil are for others to consider.  However, Tir does not value easy or senseless slaughter.  He expects his followers, especially his priests, to face challenges that test their skills, courage, and devotion to the mastery of war.  Thus, Tir's priests may find themselves fighting each other - neither is favoured above the other by Tir as long as both display a devotion to the mastery and practice of war.
Priests may be of any alignment - as long as they are devoted to war and its mastery among themselves and their followers.
Background:   Tir is the God of War and glories in acts of courage, strength, and martial prowess.  Different nations/groups tend to view Tir depending on their own view of war.  In Good aligned groups, Tir is regarded as the patron of 'just' wars and protection of the people.  A warrior's greatest achievement is a memorable feat of arms that defends his nation and people against a dangerous threat.  More evil inclined groups regard Tir as blessing the seizing of what they desire through force of arms.  Likewise, lawful groups believe Tir favours the discipline and teamwork of war that brings victory; while their chaotic counterparts believe Tir favours the individual warrior who achieves victory through his own prowess of arms, strength, and reckless courage.  Tir favours them all as long as these followers display bravery, a strong arm, skill, and a thirst for victory.

Priest Character Information:
Alignment: Tir is true neutral. His priests and followers may be of any alignment, as long as they are devoted to war.
Minimum Ability Scores: Wisdom 9 and Strength 13.
HD: d10
Races Allowed:  Half elves and human.
Nonweapon Proficiencies Required: None.
Nonweapon Proficiencies Recommended: Any related to war, such as Survival, Blind fighting...
Weapon Proficiencies Required: None. Note: a priest of Tir may have weapon specialization (as per the fighter class) in 1 weapon from the weapons permitted list.
Duties of the Priest: Healing, training  promising young warriors, accompany the armies to war, be constantly vigilant against the complacency of peace.
Weapons Permitted: Battle axe, bows (all), dagger, dirk/knife, lance, mace, maul, polearm, spear, swords (all), warhammer.   Note: All of these weapons require and allow the display of a high degree of skill in their use.
Armor Permitted: All.
All together, these constitute Excellent combat abilities.
Other Limitations:  None.
Spheres of Influence: Major Access to  All, Combat, Healing.
Minor Access to Necromantic, Protection.
Powers: Incite Berserker Rage (This power allows a priest to inspire a fighter (anyone belonging to the warrior class) to a state like berserker rage. The warrior must be willing to have this blessing bestowed upon him. It takes one round for a priest to incite a single warrior to berserker rage; the rage last six turns. A priest can use this power on any number of warriors per day, one at a time. A warrior may only be incited to berserker rage once per day; even if a different priest tries it on him, it cannot incite a warrior to a second rage in the same day. The rage isn’t identical to the abilities of the true berserker. However, it does give the warrior a + 2 to hit and damage for the duration of the rage. While enraged, the warrior cannot flee from a fight: he cannot leave the field of battle until no enemies face him. Once he does leave the field of battle, he can choose whether or not he will emerge from the rage or sustain it; a warrior would sustain it if he felt that another fight was likely to take place soon. When he emerges from the rage, the warrior takes no extra damage or ill effects).
At 5th level Inspire Fear (This spell is similar to the wizard’s fourth-level fear spell, though the cleric does not have to use material components. A priest with this power can use it twice per day)..
Followers and Strongholds:  The followers are received at 8th level, and consist of one fifth-level priest, three third-level priests and six first-level priests of the same order, plus two fifth-level fighters who act as guards. The priest may take the following on adventures: Three priests of his choice, and one fighter. The priesthood will pay for half of the cost of stronghold construction at 8th level. The stronghold must include a large armory chamber.
Symbol: Weapon (often sword).
Notes:  For purposes of both PCs and NPCs, treat priests of Tir as belonging to sub-cults.  This sub-cult will need to set an alignment/philosophy towards war, the warrior, and the rest of the world and give the sub-cult a clear symbol, and name.  For instance, Priests of Tir who are lawful good will have neutral good, lawful good, and possibly lawful neutral followers. War will be for a cause for the good of the nation and to uphold the law.  They will confine themselves to 'lawful' and 'good' conflicts but will not hesitate to carry their causes to other lands/conflicts to 'rightfully' oppose enemies of the good and law. The warrior is to be a disciplined soldier who is part of a greater engine of war. They could be represented by a golden sword set on a white backdrop.  The sub-cult could range from 'Knights of the Round Table' who quest to find evil chaos and destroy it to bring peace and order to the lands (though remaining vigilant and constantly questing for fights against evil) through a force that imposes law and good on the surrounding lands 'for their own benefit/protection'.
Any interpretation/sub-cult must hold to 2 principles: 1. a consistent alignment/world view, 2. a group that devotes itself to war and military excellence.